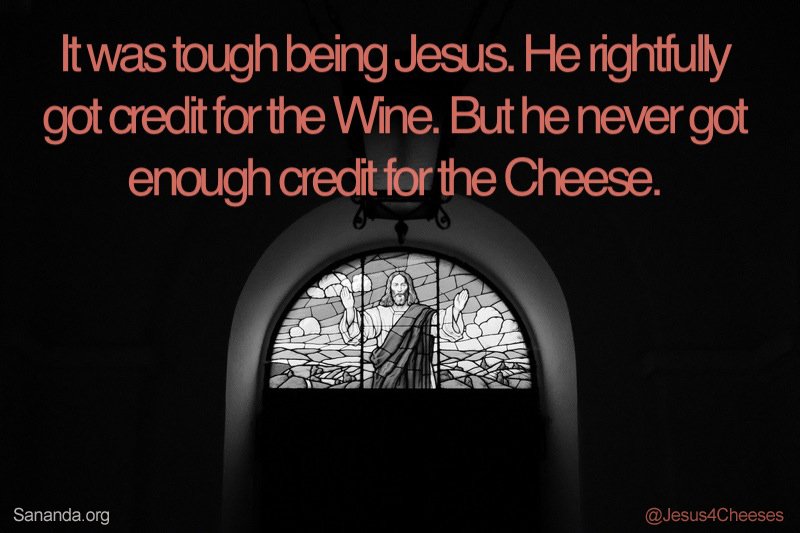 Wouldn’tit be cool if Cheese were added to communion? And maybe some small shrimp.

Wouldn’t it be cool if one could have a choice of red or white for communion?

The answer to saving religion is CATERED COMMUNION, ‘All You Can Eat’. I think Christ would like that.

Thank God, it was the LAST SUPPER, the Bar Tab alone would have killed anyone. Those disciples drank like FISH!

Jesus HAD to walk on the waters that miraculous day. He had left his Surfboard at home.

Just as impressive perhaps as the Water into Wine miracle, was the extent to which the Lord could drink BEER and not get a beer belly.Judas was especially jealous of this.

Let’s face it. Had he not been the Savior of Man, Jesus would have made a hell of a bartender!

Perhaps the Lord would agree, “Stay focused, What is Behind You Looks after Itself”.

Sometimes, the Secret to Getting Something is Not Wanting It!

They keep stripping our CULTURE, and giving us REPLACEMENTS.

To add insult to injury, They made the Lord’s family pay for the cost of the wood.

Wouldn’t it be cool if at Funerals, you had to guess which coffin the body was in?And the wrong choice popped up like a Jack In The Box! Just to make them more entertaining.

If not the GOLDEN RULE, then there is the SILVER RULE. “UNDO OTHERS BEFORE THEY GET A CHANCE TO UNDO YOU”

ALL RACE IS INFERIOR, WHEN IT IS USED TO HIDE BEHIND.

Race, such as it exists, is a PROCESS, and Not a Judgment. There is but one race, THE HUMAN RACE, the rest are TRIBES, not Races.

Verily, the Good Lord SEES THROUGH US ALL, so we might as well CUT THE BULLSHIT, and get on with it.

Most of a God’s day is spent trying to avoid being killed by their followers. It is an occupational hazard.

It was only AFTER they had killed Christ, did he realize his claustrophobia. He really didn’t like small, dark, enclosed spaces too much.

Let’s face it, were Jesus alive today, he would be very, very old. Like some of the cheeses he likes!

Even Christ couldn’t please everyone. Undoubtedly, at the miracle of the two fish and five loaves, there was a cynic at the back who complained that if Jesus were REALLY the Messiah, he would’ve taken the bones out of the fish.

….which also brings us to the fact that Jesus never got the credit he deserved for having invented the FISH SANDWICH.

CLEANLINESS IS CLOSE TO GODLINESS. TRUE! But if you look in the dictionary, Cleanliness is actually much closer to CHEESE.

Indeed, the Race is not given to the swift, nor the battle to the strong. But it is still not a bad idea to WORK OUT.

Some come for the Word, some for the Wine, others for the Cheese. It only matters that they come.

Remember, Just because you DESERVE it, doesn’t mean you don’t have to EARN it.

I have come that you might have life, including a finer Cheese selection. My people are worth it!

The Price of your Prayers being Answered, is usually REHAB.

Jesus: I was expelled from school once for having turned the water fountain into a Beer Keg. The school told my mother that I had a ‘Messiah Complex’. She rightfully pointed out to them, “WHO ELSE WOULD HAVE A MESSIAH COMPLEX BUT A MESSIAH?” That seemed to make sense to them. Then she invited them over for a nice plate of cheese.

BACK TO WRITINGS
We use cookies on our website to give you the most relevant experience by remembering your preferences and repeat visits. By clicking “Accept All”, you consent to the use of ALL the cookies. However, you may visit "Cookie Settings" to provide a controlled consent.
Cookie SettingsAccept All
Manage consent

This website uses cookies to improve your experience while you navigate through the website. Out of these, the cookies that are categorized as necessary are stored on your browser as they are essential for the working of basic functionalities of the website. We also use third-party cookies that help us analyze and understand how you use this website. These cookies will be stored in your browser only with your consent. You also have the option to opt-out of these cookies. But opting out of some of these cookies may affect your browsing experience.
Necessary Always Enabled

Any cookies that may not be particularly necessary for the website to function and is used specifically to collect user personal data via analytics, ads, other embedded contents are termed as non-necessary cookies. It is mandatory to procure user consent prior to running these cookies on your website.