WHAT an AMAZING year!
I SIMPLY cannot imagine HAVING come of AGE in a world that my GREATEST hero Muhammed Ali did not PREPARE for us in advance.
His INFLUENCE on me not ONLY changed my life but largely CREATED it.

As much as for ANY other enveloping reason, I am Sananda Maitreya BECAUSE he & GRAND Master Kareem Abdul Jabbar HAD the VISION, courage & integrity to INSIST on DIGNITY as a birthright & not as an OPTION. They calcified manhood & Made it ACCESSIBLE & real.

ALI HAD BALLS THE SIZE OF PLANETS, and most fortuitously, OURS. AS WELL AS A HEART the Circumference of the Horizon.

And in a childhood Made difficult by circumstances BEYOND my CONTROL, the presence of The GOAT Accompanied me like a guardian Angel.

To say that I IDOLIZED HIM would be more THAN understatement. He WAS the DREAM father that an abandoned boy could envision rescuing HIM from the BANAL Evil’s that were the hallmark of a suspended & DISTURBED youth in a racialized country separated by fear & ugliness.

He meant THEN & STILL DOES SO MANY THINGS, and Even as a MAN DECADES his junior, I have never COMPLETELY outgrown my early infatuation with his world shifting legacy When TRY as I MIGHT otherwise,

I LOVED HIM more THAN JESUS.

I NEVER SAW THEM CRUCIFY THE LORD CHRIST.
I DID SEE THEM LAY MUHAMMED ON A CROSS & NAIL HIM as were he Judas.
And the ressurection restored my FAITH in the MERCY & reality of Paradise.

Like Shiva,
He TOOK DESTRUCTION AND MADE IT A DAZZLING THING OF GREAT BEAUTY.
AND WAS EVERYTHING A HERO WAS MEANT TO BE, Multiplied by the force of his Brazen personality & playful wonderous id.
He WAS a poet Who WROTE with BLOOD instead of INK.
His VISION GAVE SHAPE to my life & FORM to WHAT GRACES I may STILL be absorbing.

AND TO US ROCK STARS,
HE WAS the REAL Rock God.

Admired by BOTH SAM COOKE & Elvis
& Lionized ( As Brave LIONS Are ) By great Masters Miles & Sinatra.
We will never not be grateful that he WAS provided as a GREAT MODEL
& Life Teacher.

He WAS for me the very FIRST real contact that I would ever have of PROMETHEUS & the TRUTH of his Existence there of.
And WHAT a tremendous lightbearer he WAS & remains!
Condolences to his FAMILY.

WE CAN BRONZE HIM NOW & MOVE ON
Grateful that ANY discomfort is now but a fading MEMORY.
HELLO & GOODBYE Great Soul & Mahatma!

My Debt To You Is Clear!
From One of your MANY forever proud SONS in Spirit.
I WAS INSTRUCTED, as were MANY of us how to be Heavy weight CHAMPIONS of Existence.
THANK YOU,
Sananda Maitreya! 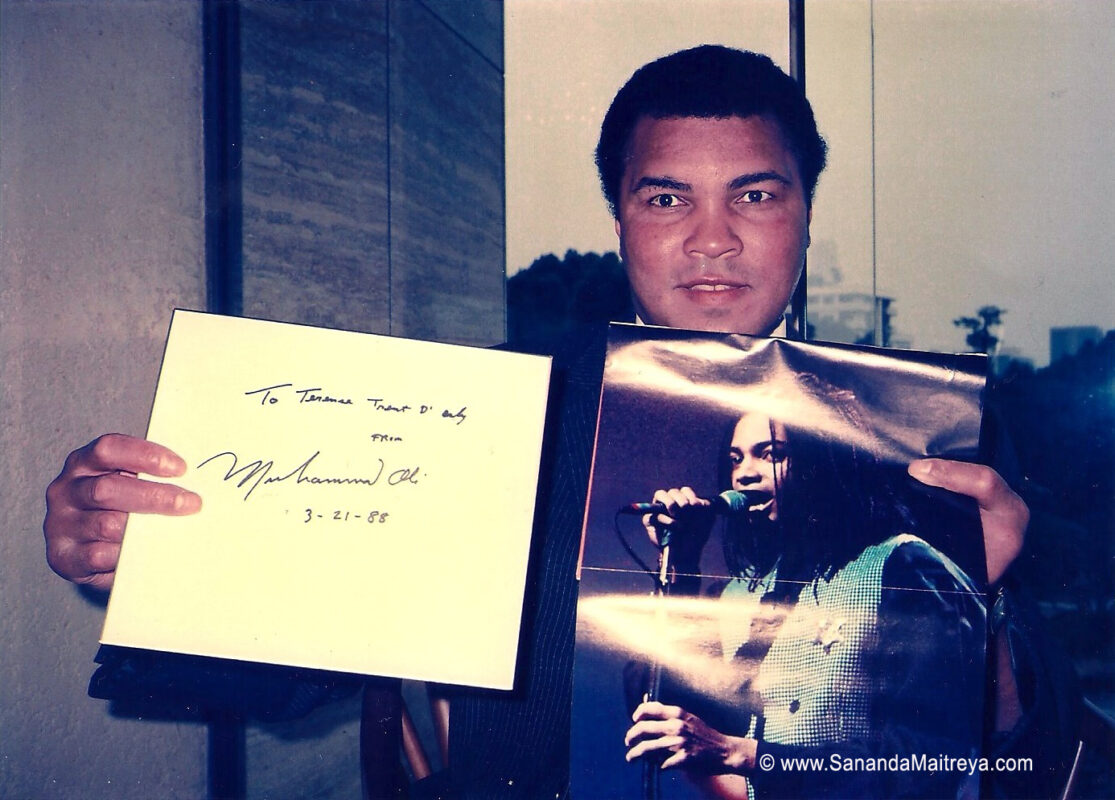 To be in his presence was never NOT to be in the Shadow of a Saint.
& He was AS close to a manifestation of a living God as I may ever be allowed to know & to expect more would be greedy & hostile to chance.

He was Malcom with a Jab, Martin with an uppercut & Mandela with better Footwork Who went places that none of the other warriors could have gone.

HE WENT DEEPER INTO THE DEATH STAR!

AND WHO IS THE mortal Who would give up 3 YEARS OF his ‘PRIME’ AS if He KNEW THAT He could always get IT back on the other side of the Chain?

He was a REAL Adonis & I LOVED that MY hero held his arms wide open to ALL Tribes & NOT just his own.

That He was Able to demonstrate BOTH ‘Race’ Pride without Racial Indifference with respect to others ONLY made it EASIER to share & spread THE GOSPEL OF ALI.

Nor can I recall EVER then OR Again, being as much in awe of a Man’s Body.
He was fathered NOT by a man, AS legend states,
but by THE SPARKS THAT ESCAPE between THE CHISEL & THE SCULPTOR’S DREAM.

He bribed a janitor I AM SURE, & stole away one night from a museum & MELTED THE MARBLE UNTIL HE BECAME A MAN.
It was All Too Apt that He was born named ‘CLAY’,
(& After a Roman Emperor, Cassius).

AND clearly AFTER molding him,
God took what was left of the Clay & Crafted THE Legend Of Prometheus
As Well As The Crust that holds THE Critical Foundations of the EARTH.

The Sustaining Grace through my Own Travails was the Stabilizing Knowledge That I had somehow managed to Strike a Chord in the heart of my Greatest Hero.
& EVERY time I had occasion to meet him, it to me was always a Confirmation That MY LIFE was Where it was Meant to be.

He DEMONSTRATED BY EXAMPLE
What Sermons & Myths Alone Could
Never Quite Convince.
HE REINFORCED MY FAITH.

May He Enjoy His SWEET HOMECOMING.
Even The ANGELS ARE EXCITED
At THE PARTY about to Bust Out
In his Returning Honor.
Sananda Maitreya.

Latest News
Archives
We use cookies on our website to give you the most relevant experience by remembering your preferences and repeat visits. By clicking “Accept All”, you consent to the use of ALL the cookies. However, you may visit "Cookie Settings" to provide a controlled consent.
Cookie SettingsAccept All
Manage consent